I want to preface this post by saying that the stretch of Highway 1 through Big Sur is known as The Scenic Crawl. On these 100 or so odd miles of twists, turns, and cliff-to-sea vistas you will find tens, maybe even a hundred, turn outs where you can pull over to let faster cars pass or get out, stretch your legs, and take in the views.

Hundreds of people do this every day. Often you see them standing on top of berms in order to get a better look. This is so common that it becomes a part of the Big Sur experience, both seeing it and doing it. 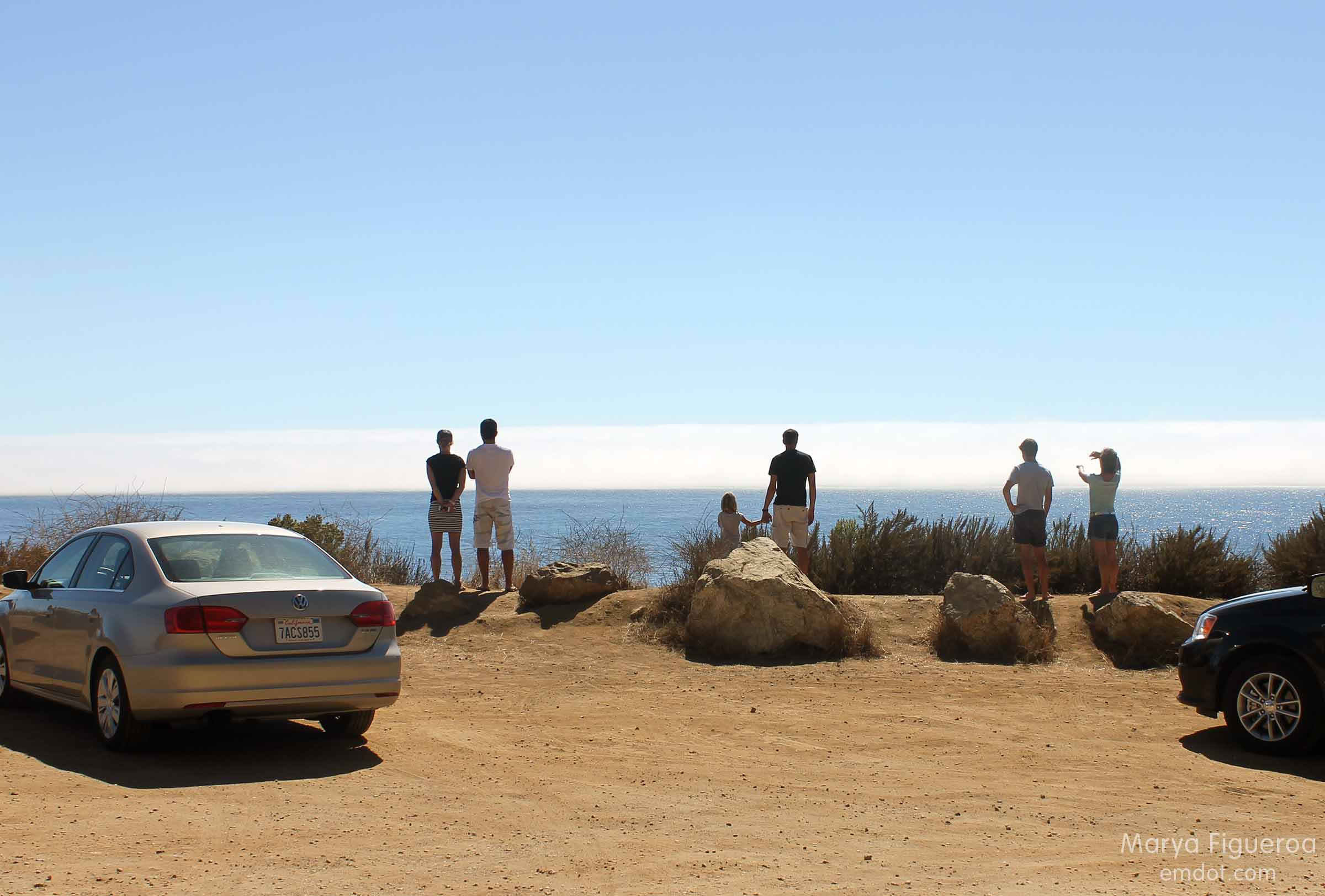 We had spent the day in Big Sur hiking the Tan Bark trail and traipsing along the coastline (posts to come). We’d caught glimpses of whales while on our hike — big spouts of spray shooting up into the air, even though the whales themselves were a mile or so out. Despite being so far away, a whale siting is still exciting, still worth a finger pointing out to sea, and still warrants a cry of “whale!” ensuring your hiking partner has seen them as well. 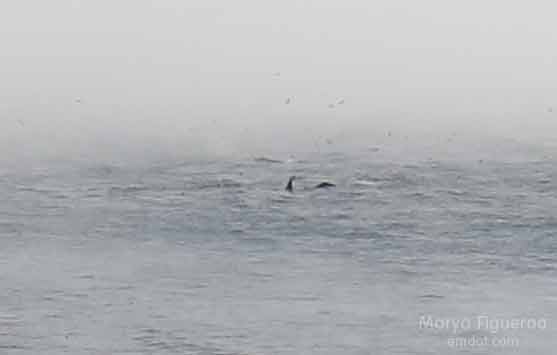 As we drove home we saw even more glimpses of whale activity and pulled over in three different spots to marvel at these creatures and our luck at seeing them, regardless of how far out they were. 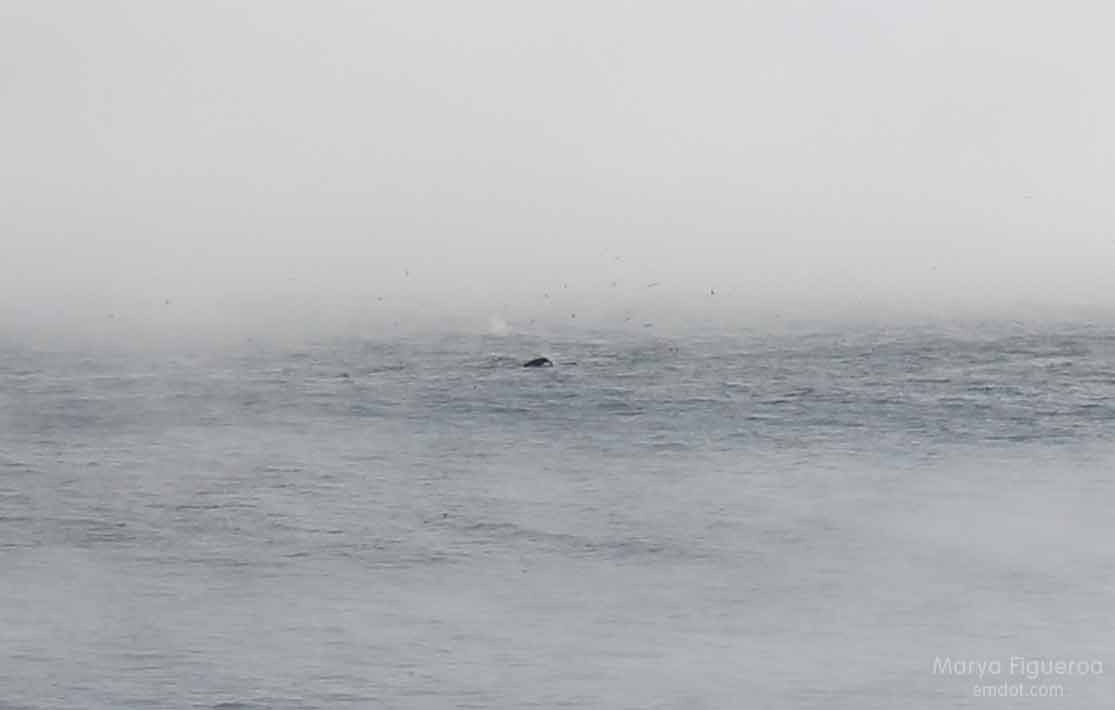 For our third stop we used a turn out just north of the huge construction site for Pitkins Curve and Rain Rocks. We’ve been eagerly charting this development for a couple of years, marveling at the work. Stopping here was exciting to me because not only would I see whales and the beautiful fog over the ocean, but I would finally have the opportunity to take some shots of the construction site. 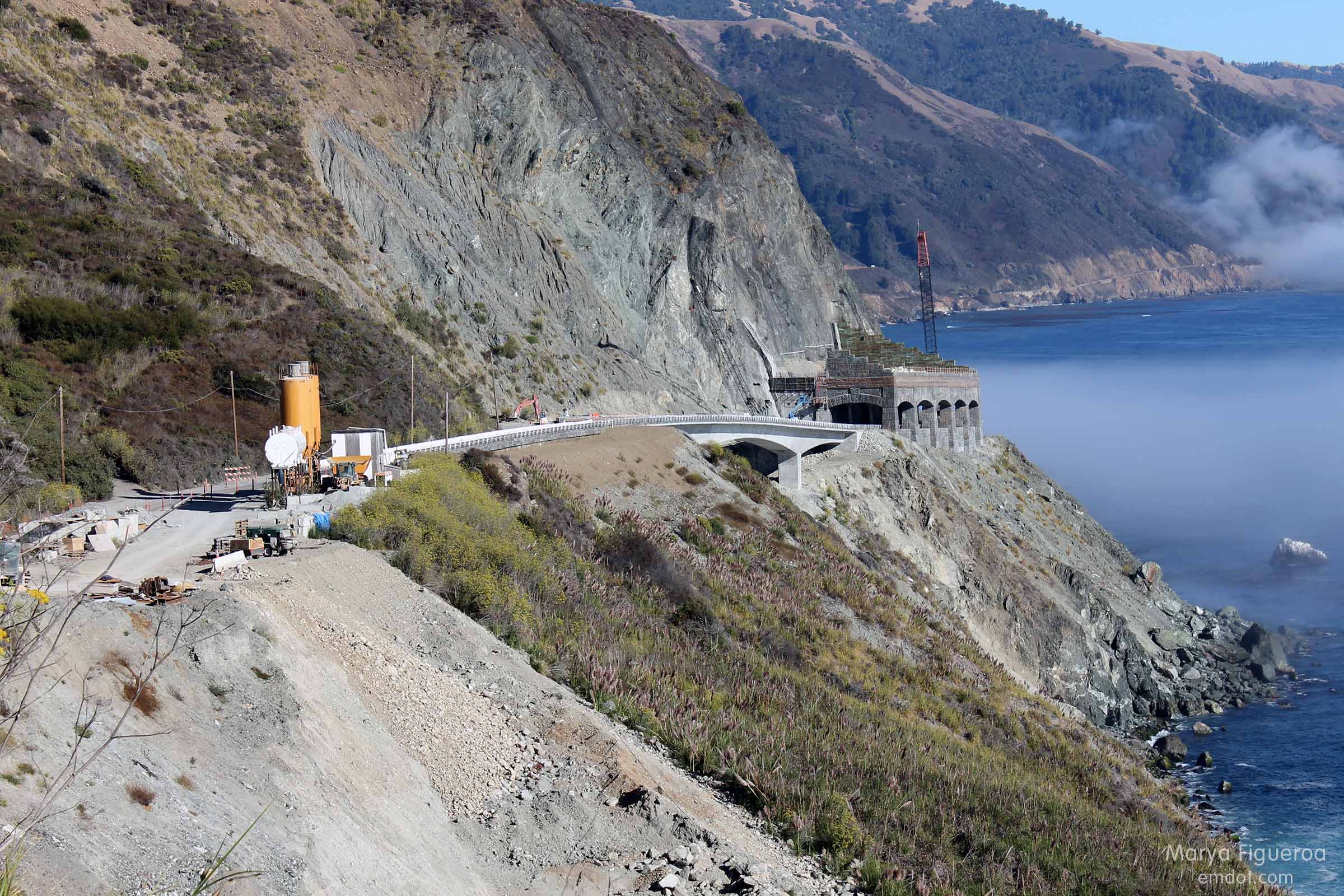 Note the very large boulders below the rock shed. THOSE CAME FROM UP ABOVE. Just a couple of examples why this rock shed is so important to this part of the coast. Prone to regular landslides and rockslides, Rain Rocks and Pitkins Curve, when damaged, can shut off the road for months at a time. Not only cutting off access for tourists, but isolating residents as well. (See Big Sur Kate’s blog for insight from a resident.) 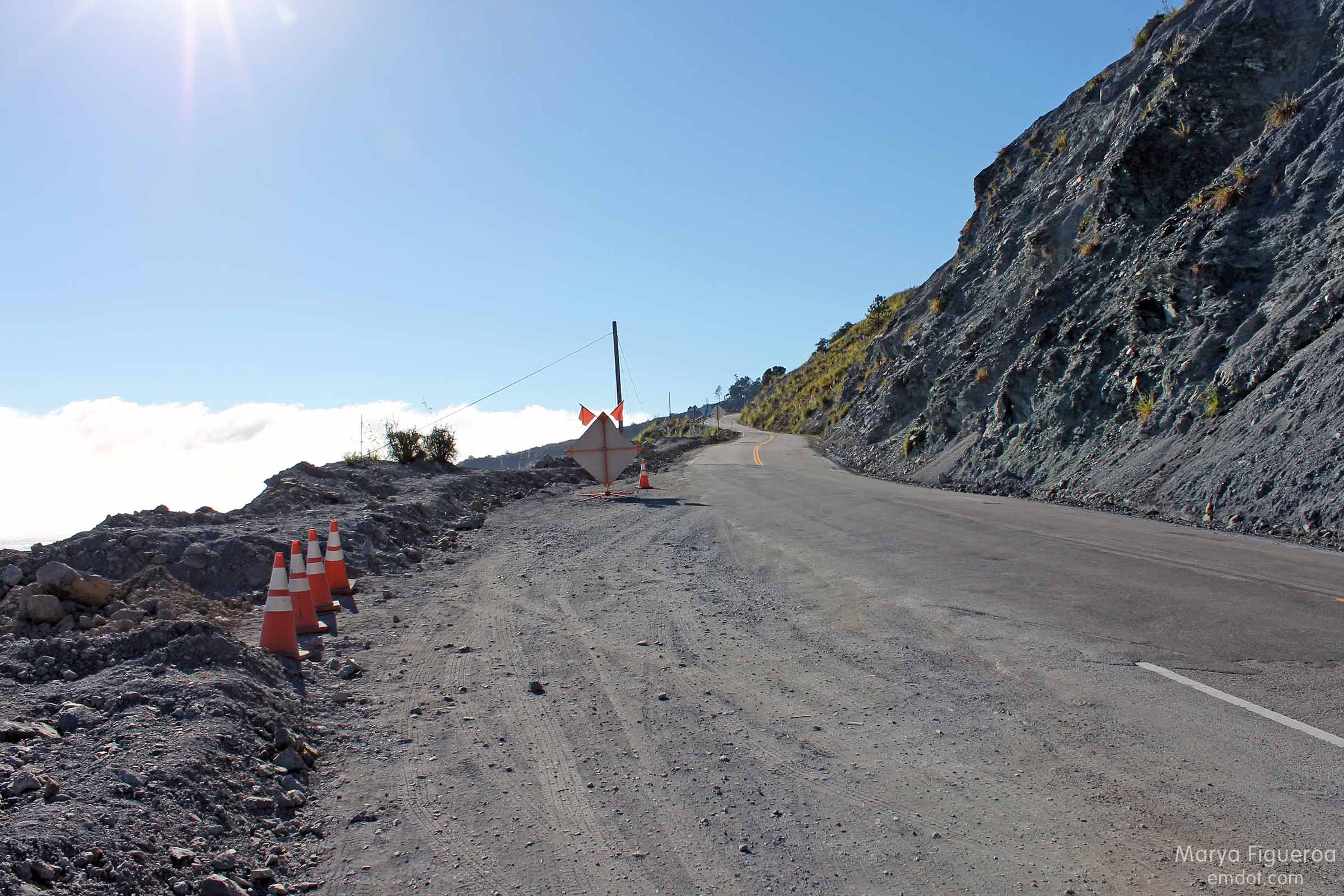 While there was a turn out here, it wasn’t a “nice” turn out. It is rough. I guess it should be, considering this is a landslide zone. The earth itself is made up a type of sandstone known as greywacke, a crumbly, unstable type of soil. If I had known about its properties beforehand, perhaps I would not have chosen to stand upon the berm at this location. 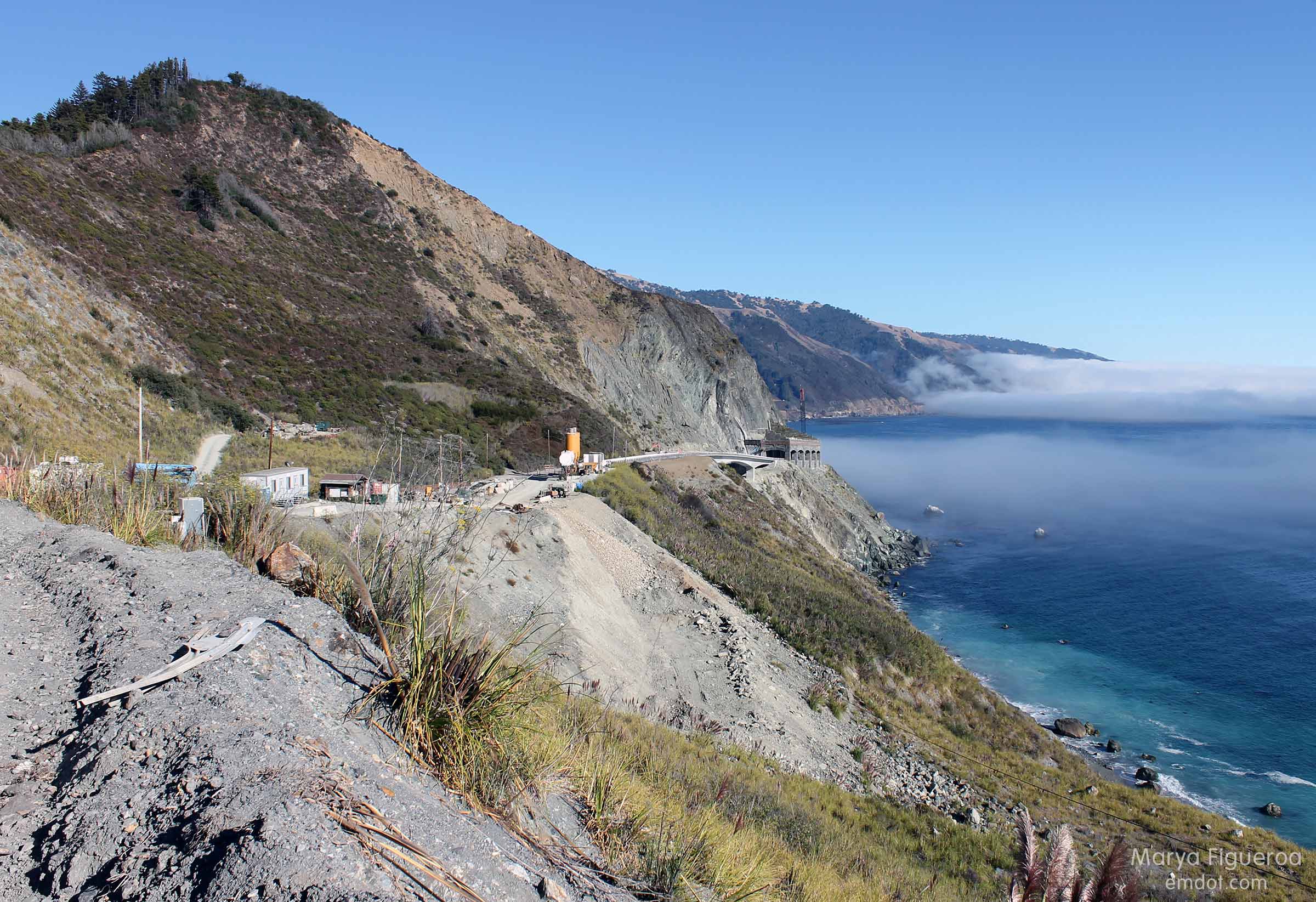 As I stepped up, I made a mental note that it was not hard packed like the berms at other locations. My feet sunk into the dirt a half-inch or so. The site was dusty and gritty. I stood squarely on top and it didn’t feel unsafe, but, as there was a sloping cliff directly below us that plunged hundreds of feet into the Pacific Ocean, I did stay mindful.

Below you can see what this coastline looks like (photo from the blog post Rain Rocks | The Coast Road). We were standing about one-half inch to the left of the Pitkins Curve arrow. There is a small dark-ish spot near where we were standing. 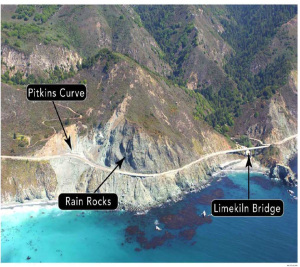 Out to sea there were about seven whales spouting and breaching and slapping their tails. The fog bank put on a show, too. 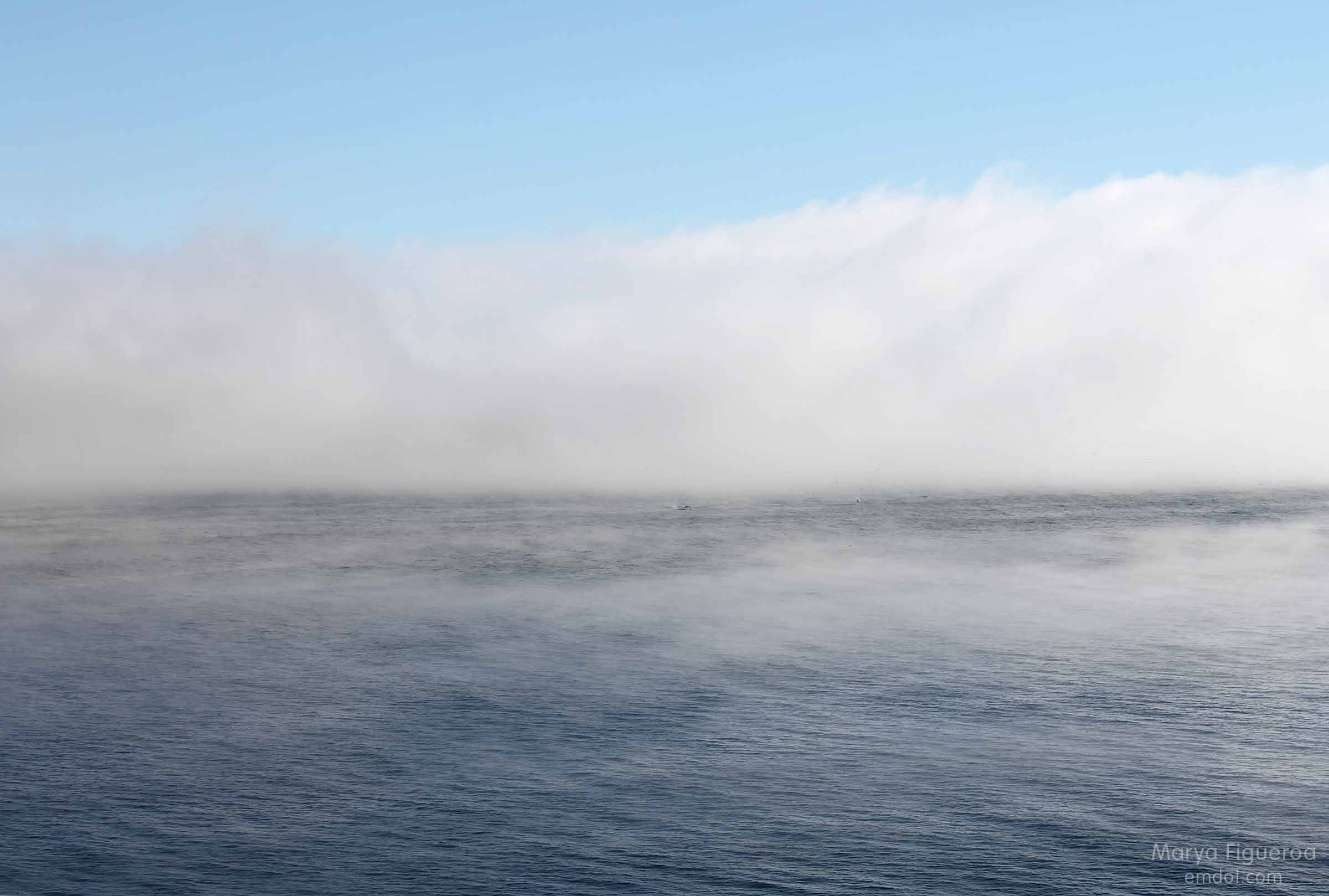 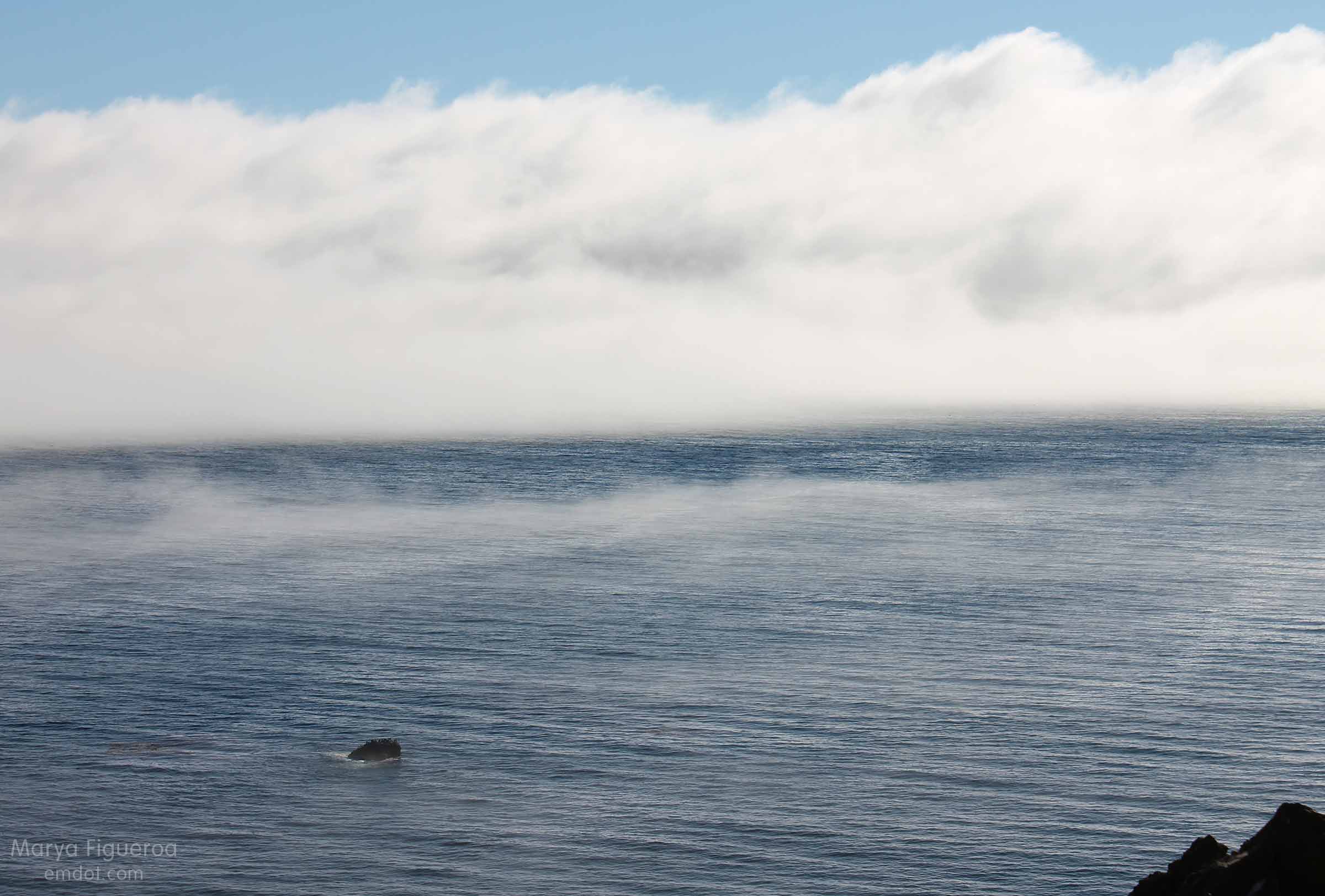 After a few minutes we decided to get back in the car and continue our trip home. Even though SLO was only 70 miles away, the crooked road and slow speed limit slows you down. It would be another two hours before we’d get home. 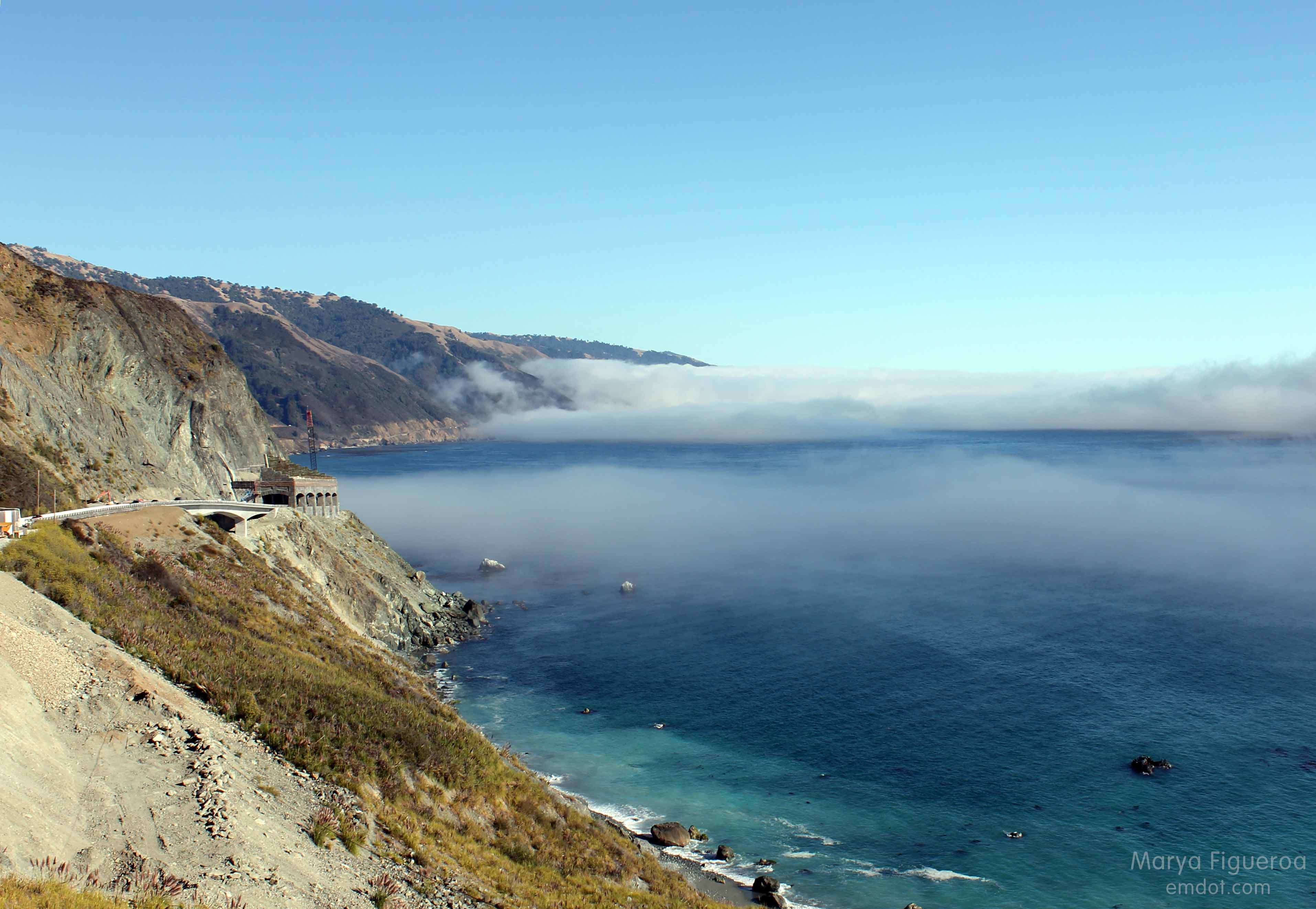 The dirt gave way, though, when I took my first step down. I tried to find my balance, but couldn’t. It wasn’t one of those slow-motion falls; it was a fast-moving crumple. As my feet couldn’t get their bearing, I just collapsed in a hard-hitting stumble-fall towards the road.

Steve was by my side in an instant. One of my sandals was three feet away (how did that happen?). My keys had pitched from my hand (and we were both so happy they didn’t go over the cliff). I stayed very still for a moment, both gathering my wits and making sure I was okay.

I was rattled, but I was okay. Adrenaline is a wonderful thing. My right hand had a giant road rash and started bleeding right away. My arm hurt, but I could move my fingers. I could stand up. I got my sandal back on. Steve grabbed my keys. It was a close one. But I was okay.

We drove straight to my doctor’s office stopping only to see if we could find some painkillers (nope) or some ice (thank you Ragged Point!). We learned later that I had a minor fracture (a nondisplaced transverse ulna fracture) that my doctor said couldn’t have happened in a better location. I got a splint. I got some heavy duty pain medication and I headed on home.

Even though it was just a little spill with just a little injury, I realize it could have been so much worse. I feel grateful that I fell toward the road and not the cliff. I feel lucky that it’s only a little fracture and not a compound doozy. I feel thankful that Steve was there not only to drive us home, but to soothe and take care of me. I feel a little stupid and cavalier for taking frivolous risks so far from home and help. It’s a fine line between smart and scared, between adventurous and idiotic. I’d like to veer on the smart and adventurous side.

I go see the orthopedist soon. My bet is that I will stay in the splint and not need a cast. I’m a little sad I won’t be able to take yoga classes or lift weights in the weeks to come like I was planning, but really, I’m just happy to be safe and on the mend.

6 thoughts on “Whales, Rain Rocks and a Broken Arm”