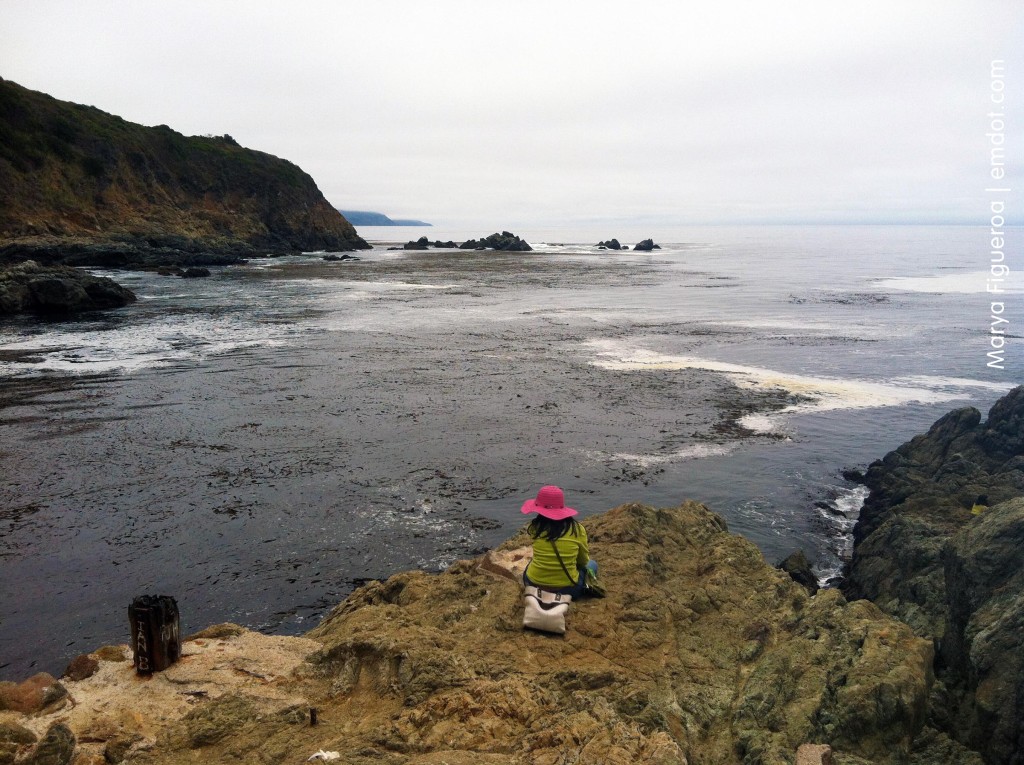 Week 19. Partington Cove used to be a working landing (or at least a loading point; let’s say that as I’m not quite sure what the difference is between a landing and a loading point) at the turn of the century for a business man who sold tanning bark. I have no idea what that is, but I learned about it on this Hiking in Big Sur – Partington Cove web page. 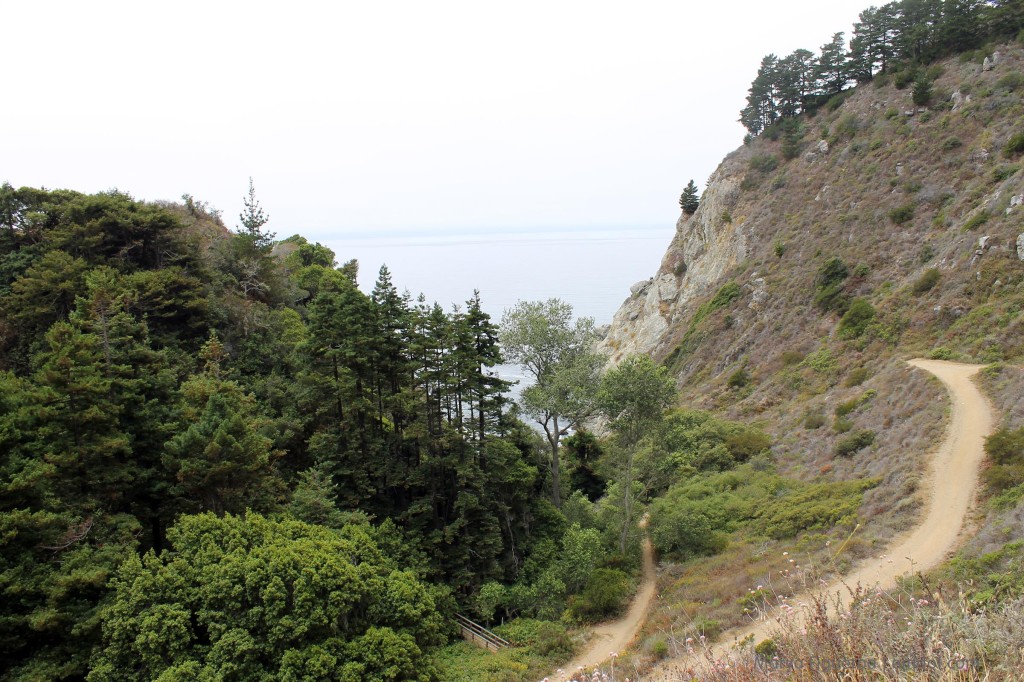 It’s a semi-steep walk down — but not difficult or tricky as it is a wide and well-maintained road; if you are fit it will be no problem. If you tire easily, bring a walking stick and some water. The trail forks. Right fork takes you to a rocky beach; left fork takes you to the cove. We took both, but went right first.

The trail features coastal redwoods and monterey cyprus as well as many other trees. It’s a green dream. Beautiful. 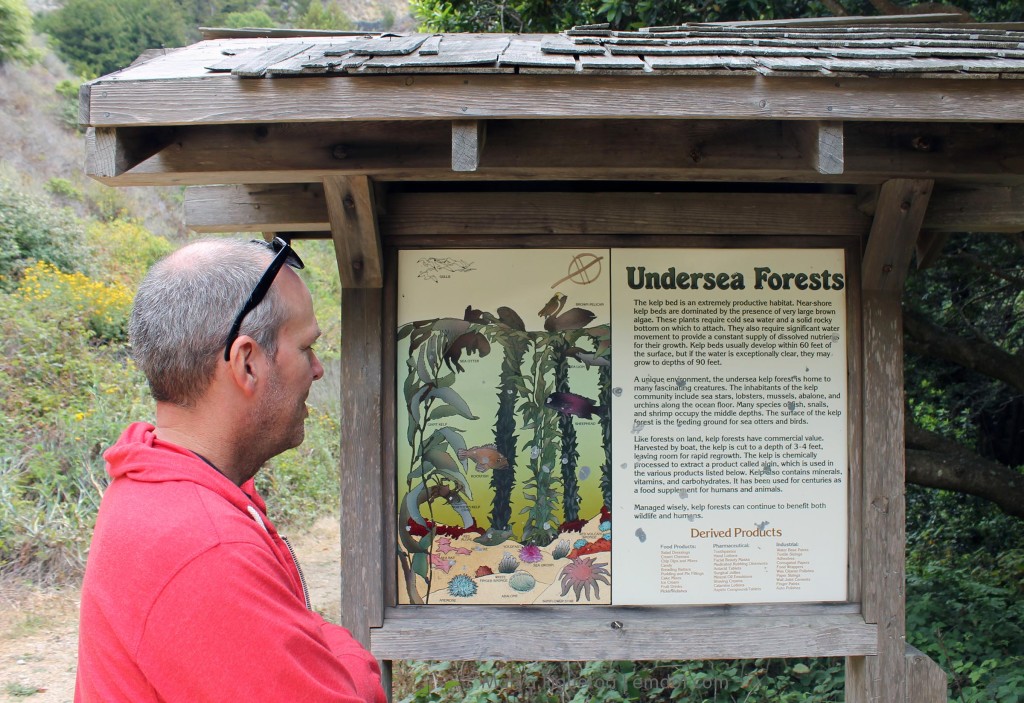 Read the sign for more information about everything going on under the water. We saw fisherman catching rock cod on both the rocky beach side and the cove side. I also thought I saw sea otters, but I think it was just very buoyant and huge kelp. 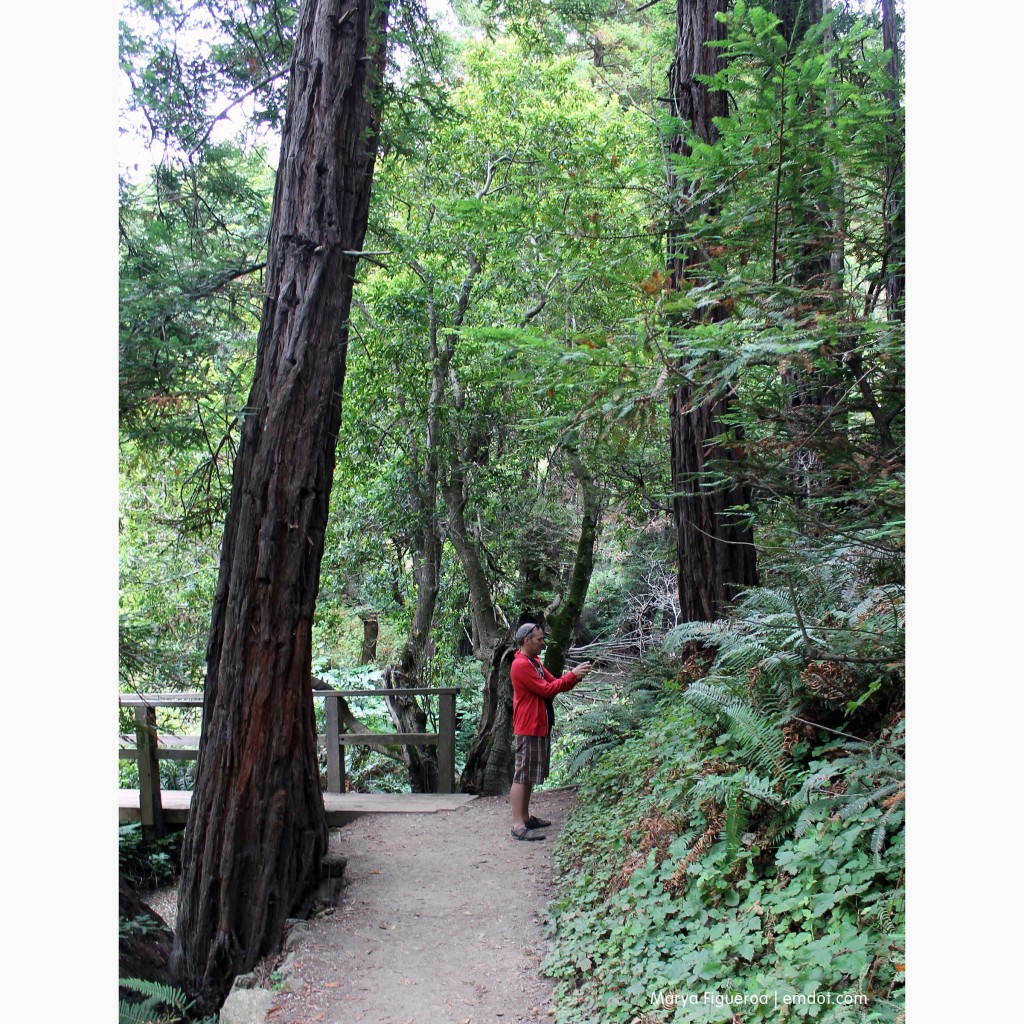 The redwoods here aren’t massive like you’ll find in other parts of the Sur, but they are still tall and impressive. 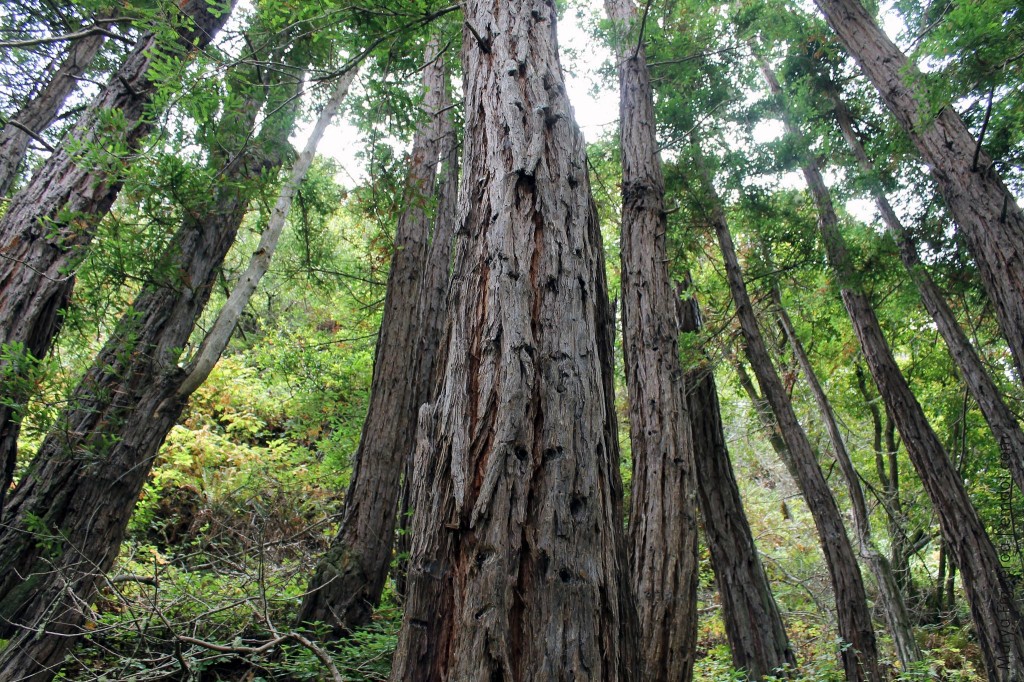 And maybe a little massive. 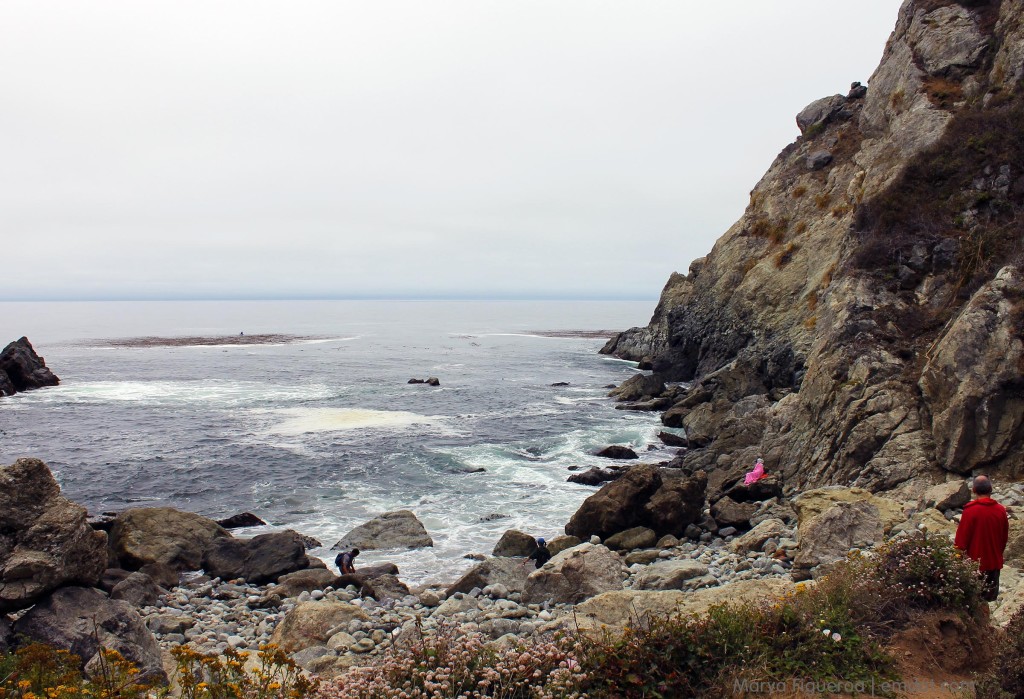 We went to the rocky beach first. The woman wrapped in a pink blanket caught my attention immediately. Her husband was out in a kayak fishing for rock cod. 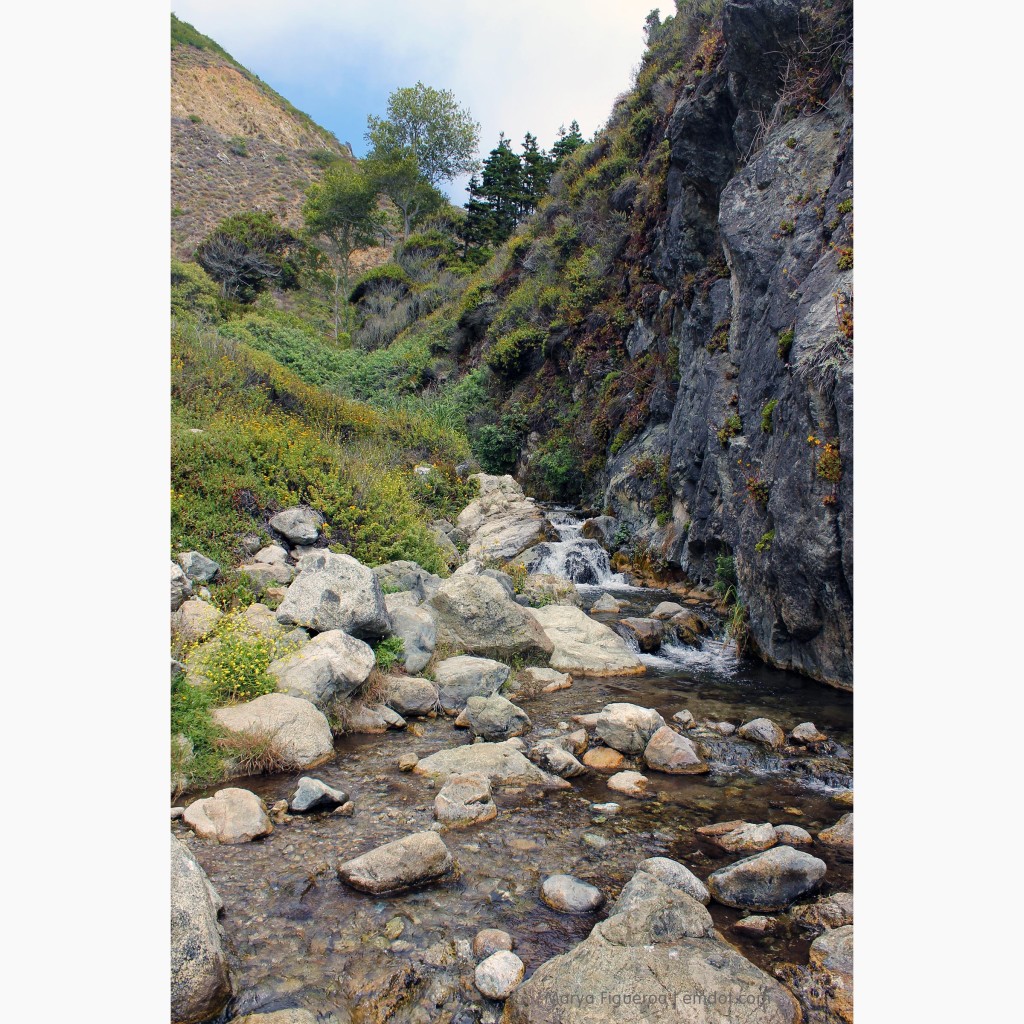 I’m not sure you can call this a waterfall proper, but it’s definitely a rapidly moving stream coming down to the ocean. 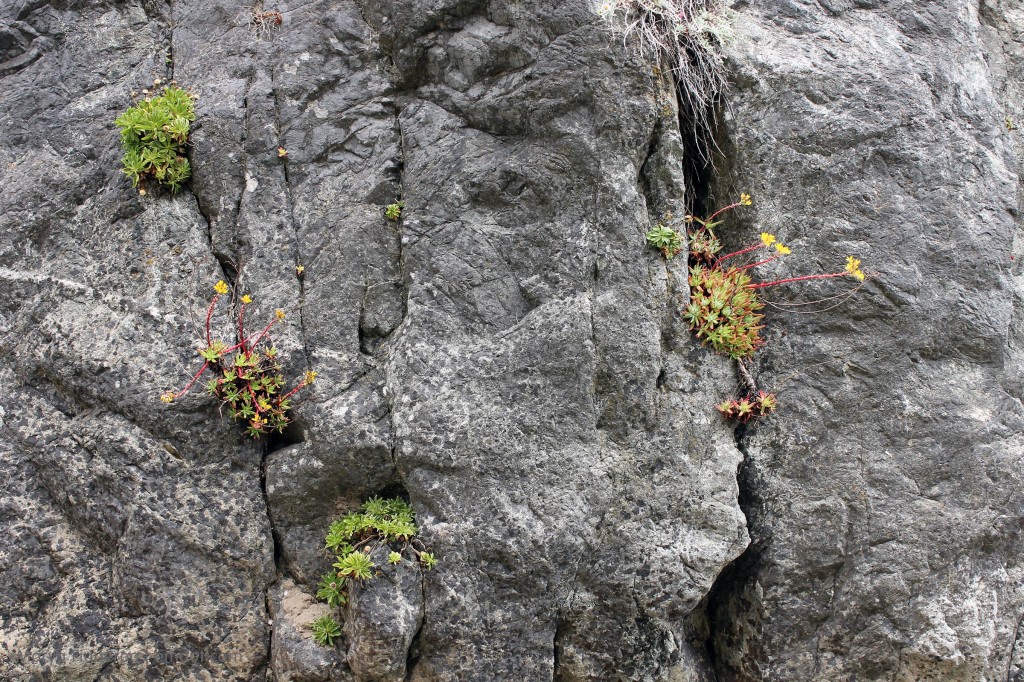 Loved the plants growing in the cracks of the rock cliffs, but also couldn’t help but realize they were helping the cracks grow wider. Some day this wall will crumble (though perhaps not in our lifetime). Erosion happens in even the best circumstances. 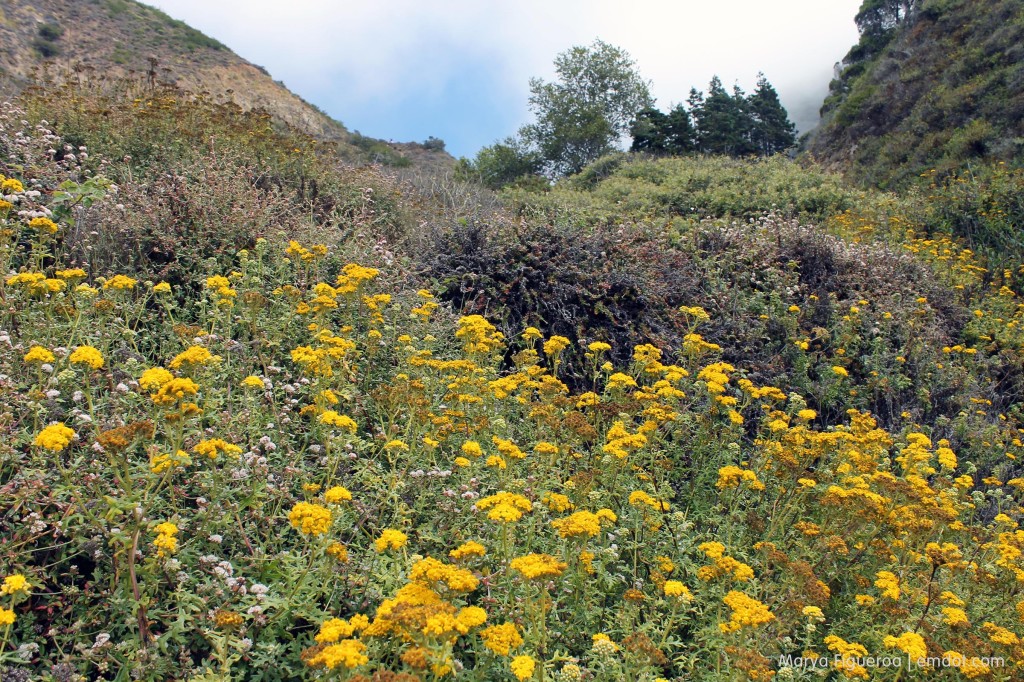 The bottom of the trail was flanked by great stands of yellow flowers, so thick that you can’t even see the trail that is switching back amongst them. 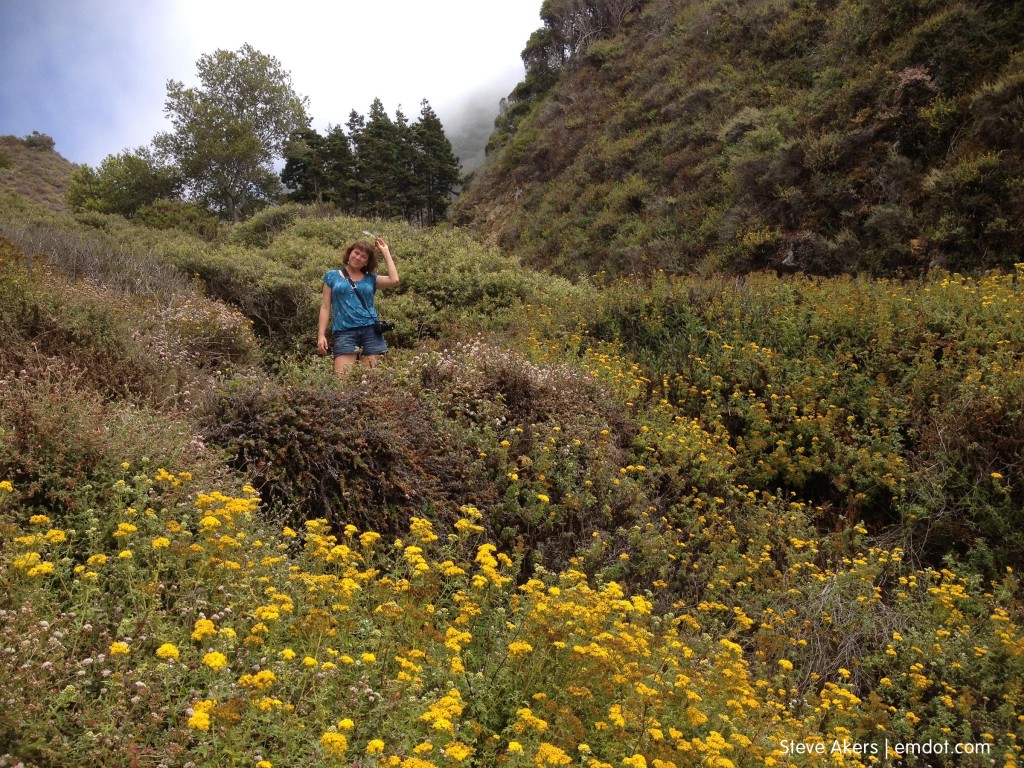 Photo above so you can see how the trail is within the flowers. 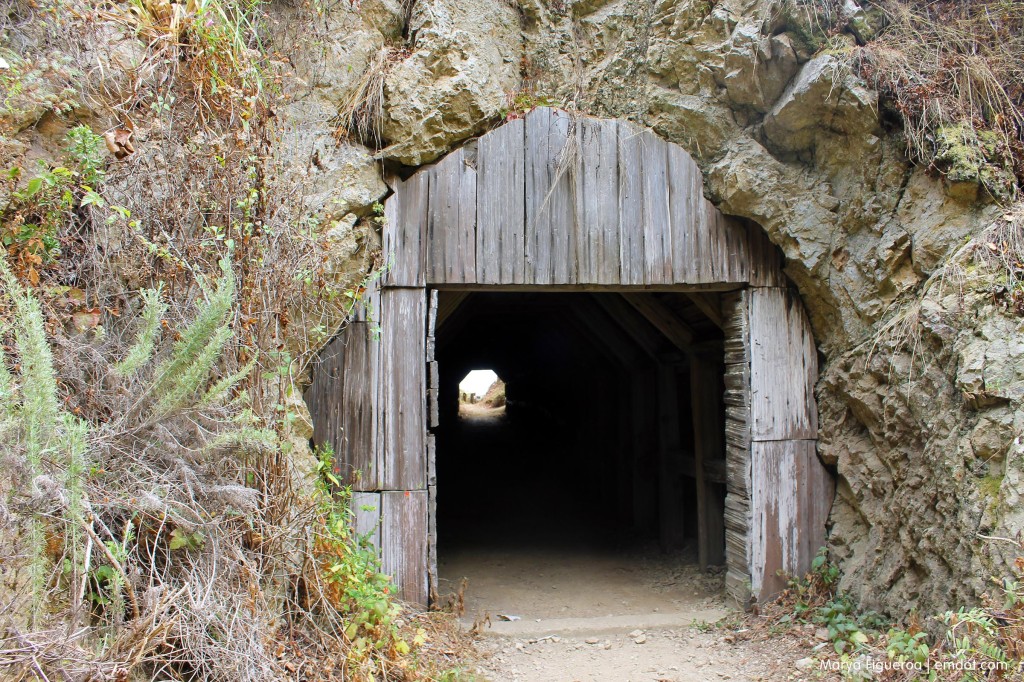 After exploring the cove, we headed back up the trail to the fork to check out the tunnel.

When we started the hike we didn’t even know its name, much less what to expect. We saw something on the east side of the road and pulled over to stop. It was only then that we realized that there was a trail on the oceanside. When we saw the tunnel I don’t think either of us had any expectations beyond getting to go into a tunnel (that alone would have been enough for us.). 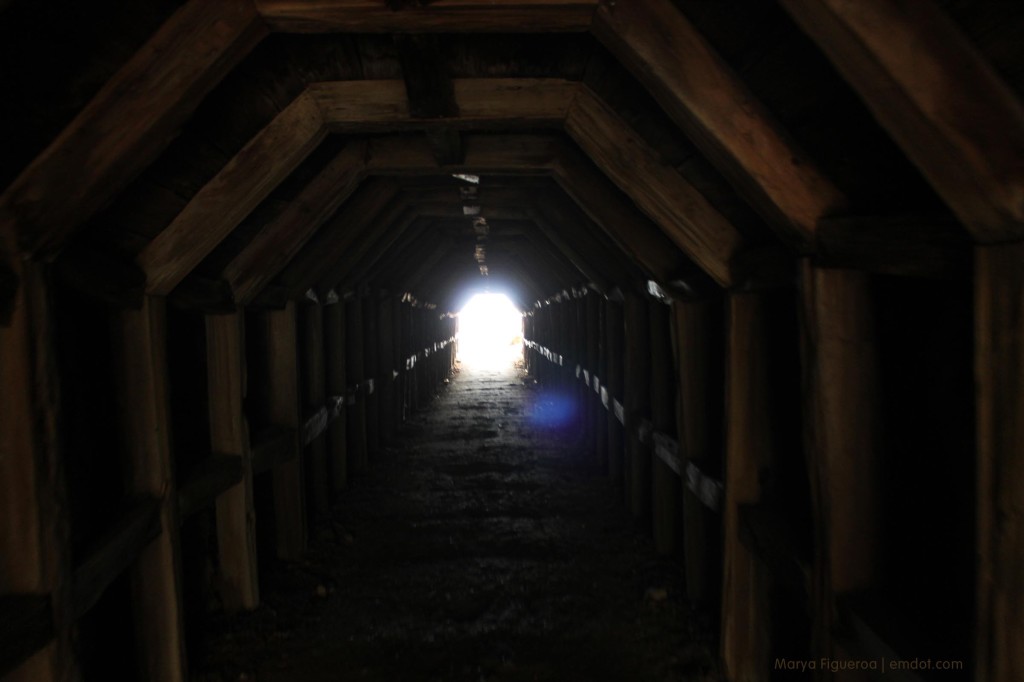 Workers used the tunnel in the late 1800s to get through 100 feet of rock to the cove. Where the ocean meets the cove seems dangerous to me; I can’t imagine pulling my boat into this cove, but I am obviously not made of seafaring fortitude. (Note: we were there on one of the calmest days I’ve ever seen at the Big Sur coast. The ocean was glass. It usually isn’t. I can imagine the waves here get ferocious.) 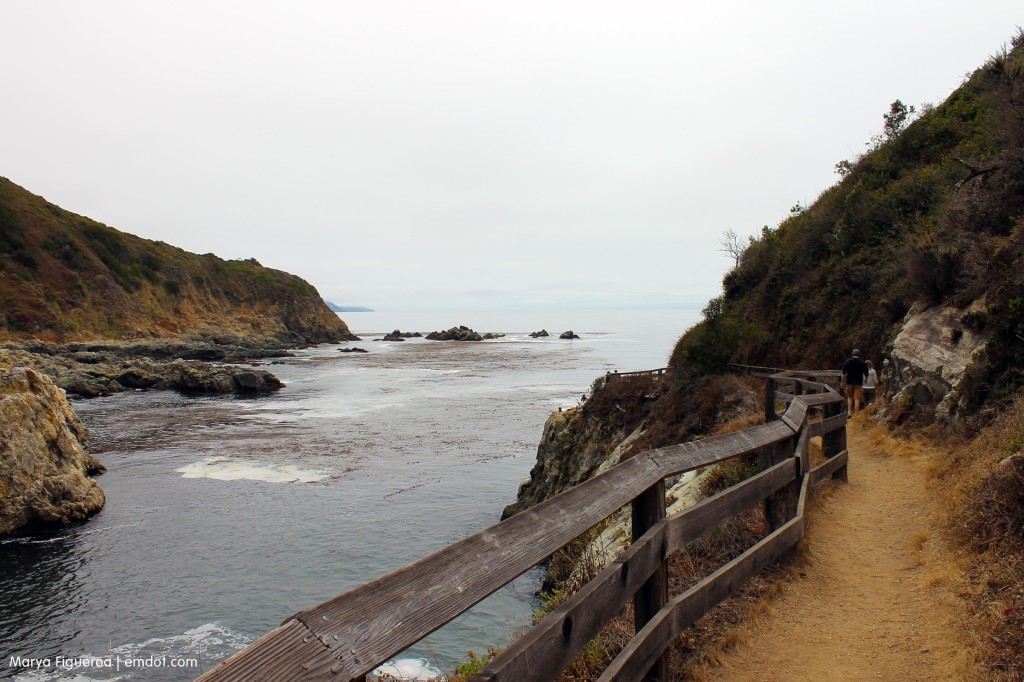 The trail is nicely maintained and I loved how the fencing included an angled top plank so you could lean over it. Whoever made that decision: good work! I did a lot of leaning while there. Very comfy. 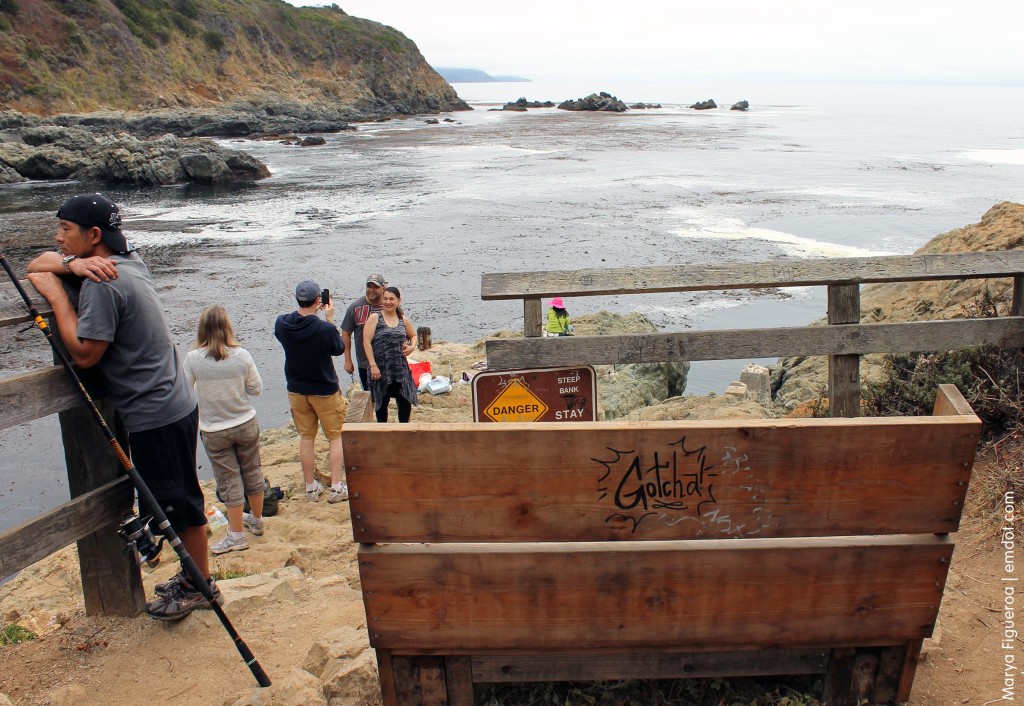 There were four fisherman at the cove and one was actively manning his fishing pole, sure that he had hooked a rock cod. (The man above is not the actively manning guy. Actively manning guy had pole in hand and was reeling in and letting back out his line, repositioning his pole, pulling back against the tug of the fish, etc.)

Above you can see a person taking a couple’s photograph. Steve took their photo on the rocky beach side. I love how they wanted their pic taken on both sides. Obviously, a happy couple (which made me happy). 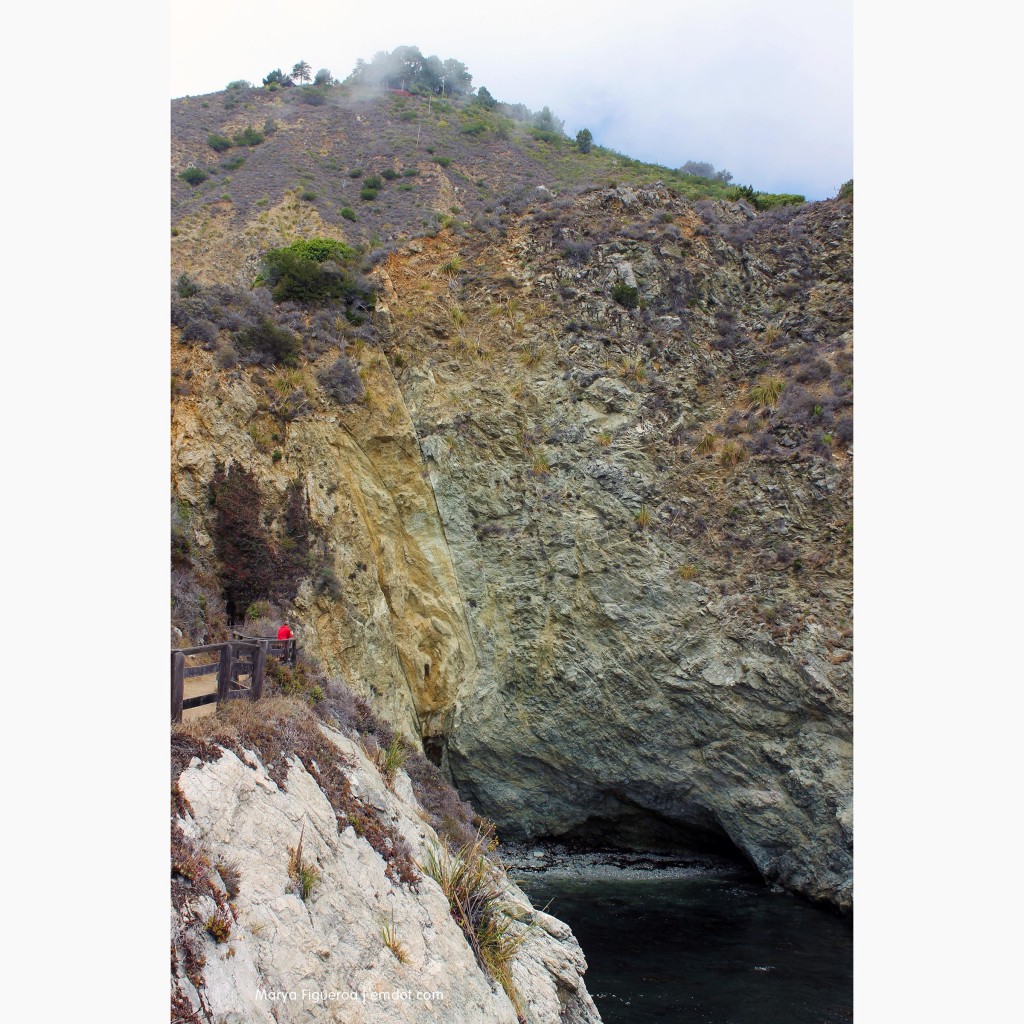 The cove itself is capital R Rugged. There is a small cave/natural bridge formation and the waves BOOM! when they go through it. You can see Steve above (red jacket) taking a sound recording of the booming waves. The cave is below him and not shown in the photo. Way up above you see the peak; there’s a house built there.

We both give Partington Cove the thumbs up. It’s rugged and beautiful (in that ruggedly beautiful way).

Of note: the poison oak, we noticed, was tricky here. You will see it blatantly growing along the side of the path with vigor and health. But it’s in other places, too. There was a pretty bank of wild oxalis going toward the tunnel. How pretty, we said. But when we looked closer we realized that the oak was hiding in with the oxalis. It’s like it has an evil agenda of getting you whenever it can. Evil oak, you don’t fool us. 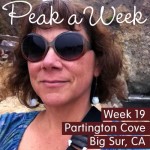